Having had a very warm welcome to Luffness for the Spring Meeting we were back for the Championships this weekend. On Sunday morning there was a light breeze and a little warmth in the air.

The 1st round scratch players teed off first thing with the course presented in excellent condition which was going to produce some well contested matches. Kay Lannin beat Vice Captain, Frances Hall 3&2. Frances had managed to hold her off till later in the round. Kirsten Ireland beat Jenni Ray 5&3 and Anne Laird won against Pauline O’Hagan at the 18th. Dawn Young won 6&4 against Anne Henderson, with Dawn showing a fine display of putting. Hazel Saunders beat Fiona Larnach 3&2 and Jill McNicoll beat Barbara Biggart 2&1, both close matches with very little between them. Mary Lou Watkins had a convincing win over Janette Murdie 5&4 and the final match was a very tightly fought battle between Carys Irvine and Annie Hunter going all the way to the 21st with Carys finally winning.

After a quick turnaround we were back on the tee for the quarter finals of the Scratch and the 1st round of the Handicap Quaich. Kirsten overcame Kay in a match that came down to the putts 3&2. Dawn, still on fine putting form beat Anne 4&2. Jill was definitely in championship form winning against Hazel 7&5. Carys and Mary Lou had a close tussle and Carys won 2&1.

The Handicap matches kicked off with Kayren Macdonald and Carol Murray finishing on the 18th with Carol 2 up. Brenda Goldstein was beaten by another North Berwick Lady, Pat Phillips 5&4. Seline Stewart and Chandrika Munro saw Seline take the victory and in the last match of the day Una Cooper beat Elspeth Douglas.

The ladies were ready to head home and recharge their batteries for their early start on Monday morning keeping everything crossed the weather would stay dry and the coastal wind wouldn’t raise its head!

As everyone arrived on Monday morning there was certainly a different feel to the weather. It was chilly and the waterproofs were donned, hats put on and whilst it felt winter had returned, it did not hold back any of the competitors.

Our first semi final, Kirsten v Dawn was a text book display of driving, pitching and putting, a very tight match and with few mistakes until it came to the 17th where Dawn had a very awkward lie in her approach to green shot and it left the door slightly ajar for Kirsten to seal the win 3&1. In the second semi final Jill had her putting boots on and Carys just narrowly missed a few putts, one that gave Jill a convincing win 5&4.

The Handicap Semi finals saw Carol Murray and Pat Phillips, both North Berwick ladies, take it to the 17th with Carol finally winning 2&1. Seline Stewart beat Una Cooper 4&3 taking her through to the final against Carol.

The players took a well-earned rest and were ready for the final round at 1.30 and it did not disappoint. Kirsten and Jill were both playing magnificent golf, with an almost perfect round. Kirsten took the lead going 1up at the 3rd but Jill quickly brought it back to A/S with a birdie on the 4th. They remained all square with a perfect display of golf until the 9th where Kirsten again went 1up, and she kept that lead until Jill had a fantastic birdie at the 15th, her approach shot going to 2ft from the pin. There were no signs of nerves going up 16 or 17, both their heads were down and driving almost identical drives, hitting the same approach shots, and putting similarly, it was such ‘tidy’ golf. Arriving at the 18th tee both players put their drives out to the right in the light rough. Jill hit a long approach to the green just being caught by the green side bunker. Kirsten then hit a long approach landing on the front of a grass hump in front of the green. Jill came out the bunker but left herself a long putt. Kirsten pitched the ball past the pin leaving a long putt back. Jill’s 4th shot was short leaving Kirsten a putt for the Championship. Kirsten just missed and Jill gave her the putt. Jill had a putt to take it up the 19th but it just slipped past the hole and it was all over. The crowd had thoroughly enjoyed this fine display of golf and both players were congratulated on their play by the crowd.

Elsewhere, on the course Seline and Carol had a very closely fought game. There wasn’t much separating the two players but Seline crept ahead a few times during the match. However, after 17 holes the match was all square. Both players played good shots to the green and it came down to the putting on the last green. Carol’s putt sat on the edge of the hole and Seline put hers in the hole to win the match. The match was played in good spirits. Very well done to both players for reaching the final.

The presentation took place in the clubhouse. Peter Grant, Luffness Captain, welcome the ladies and said how he had thoroughly enjoyed watching the Championship. I thanked Peter, all the staff and green keepers on behalf of the County for welcoming us to the Club and how much we had enjoyed being there. Thanks also went to all the County Officials for their help and spectators for coming. The prizes were presented and congratulations to all who took part, it was a fantastic Championship. 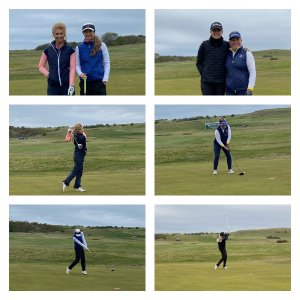 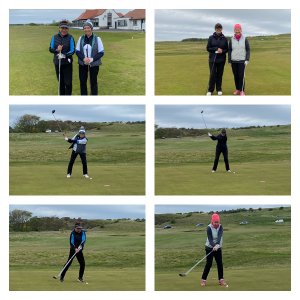 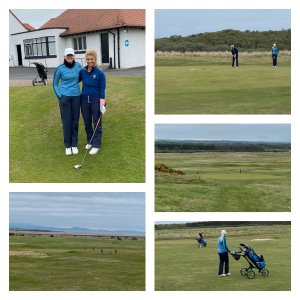 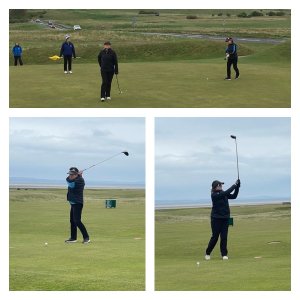 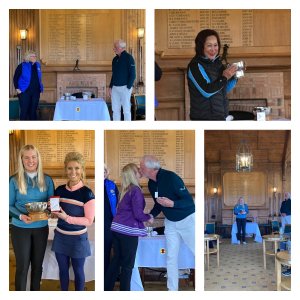 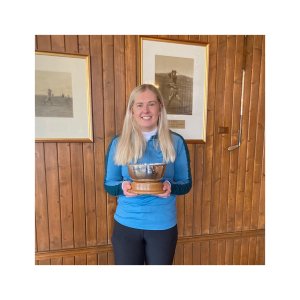 Congratulations to Kirsten Ireland winner of the 2022 Championship

Congratulations to Seline Stewart winner of the 2022 Handicap Quaich

Congratulations to all who took part today. Some very close games and some fine golfed played.

Good luck to all the Semi Finalists