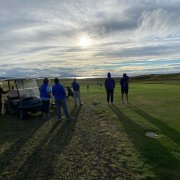 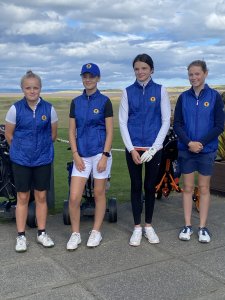 Teams of four from East Lothian, Midlothian, Fife and Stirling & Clackmannanshire arrived at the Club on what was a very blustery day.  The wind however didn’t affect the girls golf and they all put on a fine display of how to play in such conditions.

Our team, Evie McCallum, Lucy Thomas, Ellie Bent and Charlotte Bauld, were the first match off in the morning against Stirling & Clackmannanshire.  All the matches were closely fought with Stirling & Clackmannanshire coming out the victors and they proceeded to the afternoon singles final against Midlothian.  Midlothian had beaten Fife in the morning and we were to face Fife in the afternoon foursomes.

The teams enjoyed lunch in the Clubhouse and then teed off in the afternoon.  We were shown a fantastic lesson in how to play the tricky first hole at Kilspindie by all the girls.  The Midlothian v Fife match came down to 2 a piece and countback on fewest holes played.  Midlothian coming out the victors.  We had two excellent foursomes matches and won one and lost one, Stirling having played the least number of holes won the afternoon foursomes.

There were officials from all  the Counties, parents and spectators watching and it was clear to see how the juniors’ sections of all the counties are thriving.

A huge thanks goes to Shona Paton, Jenni Ray, Carys Irvine and Elaine Dick for helping and being present on the day and to our team who played so well. It was a pleasure to have them representing the County.

The final play was followed by the prize giving and an excellent supper was enjoyed by all.

Congratulations go to Midlothian on their win.

We look forward to next year at Ladybank. 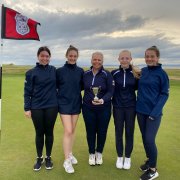 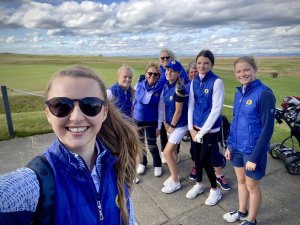 Another Win for Louise Martin
Scroll to top