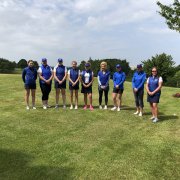 A fighting draw against Midlothian.

In a tense finish Mary Lou won her match to earn the draw.  We think this is the 30th time Mary Lou has played in the Jamboree.

The match between Stirling and Clackmannanshire and Fife ended in a draw.

Well done to the team

Full scores can be found on the Scottish golf App.

The results of matches are as follows: