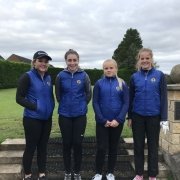 It is an annual match played in one day between teams of 4 girls from each of East Lothian, Fife, Midlothian and Stirling & Clackmannan County Golf Associations. The Cuthbertson Cup is awarded to the winning team.

We played against Midlothian girls in the morning singles. The games were all closely competed and we drew 2 – 2.

Sadly, we lost on a countback so Midlothian went on to play Fife in the final. Fife won 3.5 – 0.5 and so won the Cuthbertson Cup for the 3rd consecutive year. Congratulations to Fife (Evanna, Eilidh, Porscha and Hannah).

We played foursomes in the afternoon against Stirling and Clackmannan. The two games were very close but we lost both matches.

Well done to the 4 girls who represented East Lothian. The weather was kind to us and they all enjoyed playing Falkirk Tryst. Thank you to Stirling and Clackmannan for organising the day. Many thanks also to Jenni Ray and Joanne Watt for their help and support on the day. 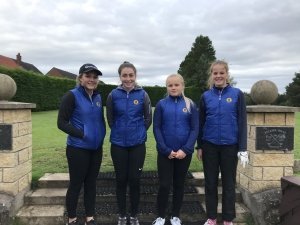