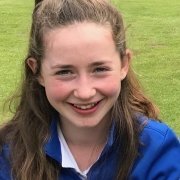 Grace Crawford from Gullane Golf Club who won the Scottish Under 14 Championship after a playoff with Kasumi Tran of Wales.

Grace who was part of the Scotland Girls’ Home International team just last week, reached the turn in three-under, level par overall, to close the overnight deficit and reach the top of the leaderboard going into the final nine.

After five straight pars to start the back-nine, Crawford took a two-shot lead into the final three holes over her playing partner Tran.

However, Tran birdied 16 and 17 to take a one-shot lead going down 18 but Crawford bounced back from a bogey at 16, birdieing the par-5 18th to force a playoff.

The players headed back down the 1st and it was Crawford who secured the victory with a stunning eagle three.

Thank you to Scottish Golf for this report

More information can be found here