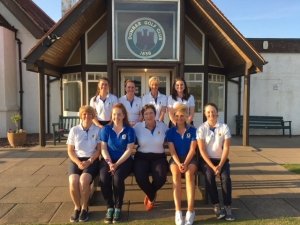 The final day and hopes were high.  Stirling & Clackmannan were to play Midlothian in the first match. S&C had won one match and halved another and a win against Midlothian might give them the title depending on the outcome of the other match. A Midlothian win would give them a clean sweep on their way to retaining the title.

The morning foursome gave Midlothian the edge with a 2-1 lead. The afternoon singles however were a clean sweep for Midlothian.

Meanwhile in the second match East Lothian played Fife. Having lost their first two matches Fife were keen to avoid the wooden spoon. East Lothian hoped for a win to perhaps secure second place or even a three way count back for first if S&C won! Those hopes were dampened as all three of the morning foursomes games went to Fife.

As the afternoon play got under way, the mist which had been hanging around over the water all morning started to roll in and  jackets and waterproofs were donned as protection  from the cold east wind.

It was soon clear that it was going to be difficult to secure the five games in the singles needed to win the match and indeed the Fife team came good for their captain on the final day. East Lothian’s hopes for points as the players played to the gallery at the 13th rested with three games.  Joanne Free went on to win 4&3 over Jocelyn Mackie. Jill McNicoll must have hoped to win a the hole when Hannah Braidwood pushed her drive way right onto the middle of the 14 fairway. Hannah played a wonderful long shot over the edge of the hill to the left hand side of the green. A long straight put and a tap in gave her a par. Jill’s ball lay just off the green on the right between the bunkers. An awkward putt uphill over the edge of the bunker came up short and the second wandered off leaving Jill with a 5. Jill fought on but went down 3&1.

In the last match Kay Lannin and Brogan Clark went dormie 5 in Kay’s favour at the 13th. As the sun eventually burst forth the 14th and 15th both went to Brogan. Although her first putt on 16 rattled the pole as it went past a half in par was enough to ensure a win for Kay.

Midlothian retained the title and will go forward to represent the East Division in the Scottish finals at Kilmacolm in September and we wish them luck.

Dunbar was in great condition but sadly East Lothian could not convert home advantage into a home win but we will be back next year at Ladybank keen for a better outcome.