The First Match of the day was the match between Stirling & Clackmanan and Fife. S&C got off to a racing starting the Foursomes claiming all three games.  In the afternoon singles games a few more bounces went Fife’s way and they managed to win three and half a fourth.

Jill’s dad George McNicoll obviously thought Jenni needed L plates too and arrived with one this morning for the buggy. 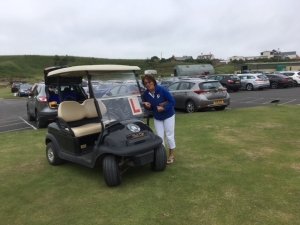 East Lothian took on Midlothian in the second match.  The first two matches were tight and could have gone either way but Louise Fraser & Hannah Darling proved the steadier pair taking the first point 3&2 from Jill McNicoll & Alyssa Balding.

The middle game between Alison McBride & Kate McIntosh and Joanne Free & Lesley Atkins kept us in suspense all the way to the 18th and a halved match.

First game in the afternoon was between the two  “Juniors” Hannah Darling and Annabel Hosie. An on form Hannah quickly took the upper hand.

Joanne Free bounced back from the morning with some great golf to secured the first win of the afternoon  for East Lothian.

The third game could have gone either way but the very steady Karen Marshall payed a great short game to see off the challenge of Lesley Atkins.

Jill McNicoll fell victim to too many bunkers in her defeat at the hands of Caroline Steedman.

In an up and down game Alyssa Balding  nudged ahead of Alison McBride again in the closing holes and a par on the last hole was sufficient to secure the game and another point for East Lothian.

In the final game Kay Lannin was up against Louise Fraser. This time it was the turn of Louise to find a series is hole allowing Kay to stretch her lead to 4 at the turn before being pegged back to 1. Leaving the 13th green her caddy, Dawn Young decided to take out your captain with a runaway trolley but your captain is made of stronger stuff and the trolley came off worst landing  on its side, shed its bag and battery and Kay’s snack.  Kay kept her calm and a birdie put her to 2 up playing the 16th. A mass of supporters and a buggy may or not have influenced Kay in taking a slightly left approach to the green but a well judged bounce of the perimeter wall gave her the chance for a birdie 2 and a 3&2 win. Dawn may get the L plate tomorrow!

Full results below.    See also our face book page for other photo