We returned to Gullane this morning for the semi-finals of the championship and the final of the Handicap Quaich. There was a bit of a breeze but glorious sunshine. Cut off trousers polo shirts and sun visors were the order of the day.

In the first match out defending Champion Jill McNicoll played past Captain Barbara Biggart. Jill edged ahead at the 7th and made steady progress to find herself 4 up at the 15th. A strong comeback from Barbara however took the game to the 18th where Jill closed off the game 1 up.

The second match was between newcomers to the County both playing in their first East Lothian Championship. Audrey Dunnett won out eventually over Karen Fullerton at the 17th 3&1. Karen found a few too many bunkers along the way but was delighted to have had the chance to play Gullane in such great conditions.

The final match of the morning was the Handicap Quaich which was a long battle for both players against each other and the bunkers. The lead swung back and forth between June Elliot and Lorna Thomson with neither player quite able to make more than a two hole lead before being pulled back to all square, which was the state of play at the 18th. Lorna played a great shot to the green from a fairway bunker only to see it kick into a green side bunker. A bunker too far in this case and June took the trophy for the first time.

The conditions this afternoon were in complete contrast to the morning with heavy rain and wind for much of the round. Waterproofs were donned by most on the first tee for warmth as well as protection from the threatening rain. Audrey took the first hole and Jill the second followed by several halved matches before Jill started to edge slowly ahead and when Audrey got caught up in the wet rough on the long 15, Jill drove home her advantage hitting the green in regulation and a shake of the hands followed soon after. Jill retained her title with a 4&3 win.

Audrey like Karen had greatly enjoyed the experience and we are sure that we will see both players returning to the fray in future Championships.

Well done to our Champions Jill McNicoll and June Elliot. 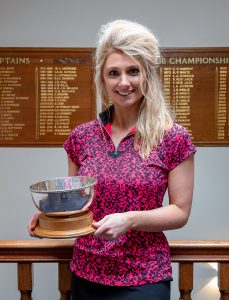 Thanks also to those who turned out to supports the players.

A selection of photos from the Championship
Scroll to top