The Cuthbertson Cup was played on Sunday 22nd April 2018 at Baberton in cold and blustery conditions. Fortunately the heavy showers came at lunchtime when they (and the team officials and parents) were all inside enjoying their soup and sandwiches and after play was complete. 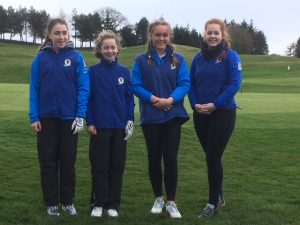 Our team of Lucy Hall, Grace Crawford, Annie Wilson and Annabel Hosie gathered at the practise putting green before heading down to the tee.

The Midlothian team of Carys Irvine, Lucy Morrison, Lauren Reid and Mollaidh Nicholson drew with East Lothian 2-2. In the opening game Annabel lost to Carys, Grace beat Lucy Morrison,   newcomers to the team, Annie beat Mollaidh and  Lucy narrowly lost to Lauren at the 18th.  Following a countback East Lothian lost out and Midlothian went through to play Fife for the trophy while Stirling and Clackmanan played East Lothian in the Foursomes.

The very strong Fife team beat Midlothian 4-0 while East Lothian were the winners in the Foursomes with 2 good wins.