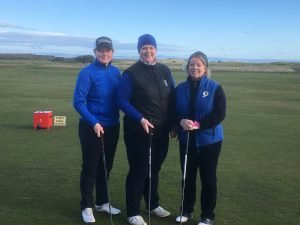 The County Flag flew over Muirfield yesterday for our first County Meeting of the year and the first to be held at Muirfield. The conditions were to say the least testing with winds toppling trolleys and making it very difficult around the greens. Despite the conditions there were no call offs on the day and while there were rather more N/Rs than usual only a very few decided to retire at the 9th. We were however lucky that apart from one hail shower bang on 2pm as I tee’d off the forecasted  rain stayed away.

The winds and chill on the course were balanced by the warmth of the welcome we received in the clubhouse and many people have commented on how friendly and welcoming everyone was.

The first three pictured above, Stacey Cameron, Mary Lou Watkins and Hazel Saunders, set off at 8am and set the pace both in terms of scores and pace of play. They completed their round in 3hours 20 minutes and all three will be returning on Sunday to play in the championship. Congratulations go to Stacey also for winning the over all scratch prize.

Despite the conditions several members managed reductions in their handicap including the three ladies contesting the Silver Handicap Prizes. All three scored nett 77 and count backs were required. Congratulations to new member Alyssa Balding who has moved north from Northumberland (1st), Dawn Young (2nd) and Margaret Milligan (3rd)

As the winds strengthened even more in the afternoon the famous short  7th hole (photo above) was made even more difficult as it became almost impossible to replace a ball that had been marked without it wandering off downhill in the wind.

The winds abated late in the day and everyone managed to get round  before the light failed and as we awaited their return we enjoyed a wonderful sunset.