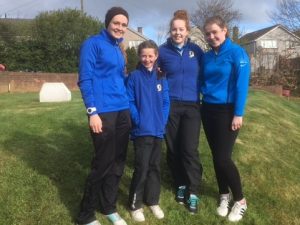 Congratulations go to Fife for a magnificent win in this year’s Cuthbertson Cup held at Pitreavie GC  on Saturday. Having beaten Midlothian in the morning 4-0 they went on to beat Stirling & Clackmannan 4-0 in the afternoon as well. They were deserving victors in this the 60th year of the competition.

The conditions for all the girls were testing with a cold wind throughout the day which also made club selection over water hazards and onto plateau greens difficult.

Our team played very well halving the morning game 2-2 with Stirling & Clackmannan in 4 very tightly fought matches. As a result of the draw there was a count of the holes played and again we were tied on 32 each. The match was eventually determined by the result of the first game which we had lost at the 17th.

Despite their disappointment at missing out in such a close match in the morning the girls went out to determined to win their foursomes match v Midlothian in the afternoon. Again they entertained us to the end with Lauren and Annabel halving their match and Catherine and Grace fighting back from 3 down early on to win on the 18th.

Well done girls on in your determination and great team spirit and to all the girls taking part in a competition played in such a friendly and courteous manner.